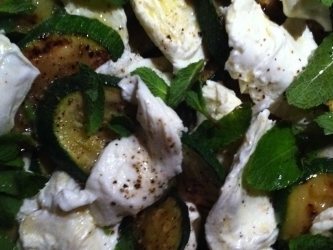 MOZARELLA AND COURGETTE SALAD WITH MINT

4 courgettes sliced diagonally
2 buffalo mozzarellas
2 tbsp mint leaves
2 tbsp lemon juice
• Gently fry the courgettes in olive oil on each side (takes 4-5 mins turning them a couple of times). Season and leave to cool.
• Layer them across a serving plate, season again, mix in the sliced mozzarella and mint.
• Whisk the lemon juice with the olive oil and pour over.